The trailer of this French-American film, directed by Louis Leterrier, promises much. It is edited and structured such that it instantly leads one to believe that this film will be one to contest with the likes of The Illusionist (2006) and The Prestige (2005) – in fact some scenes from the trailer seem to virtually have been lifted from The Prestige, including certain bits of dialogue (for instance, in Now You See Me (the trailer) a voiceover comments, ‘Come in closer, because the more you think you see, the easier it’ll be to fool you’; in the Prestige, ‘Now you’re looking for the secret… but you won’t find it, because of course you’re not really looking. You don’t really want to know. You want to be fooled’).

But to the film’s credit, it is not a poorly-made version of The Prestige as I had initially feared.

The plot is as follows: A team of four former street magicians (now stage illusionists) appear to use ‘magic’ to pull off a number of bank heists while performing on stage, leading to them being investigated by the FBI and Interpol, through whose fingers they appear to slip through at every turn. 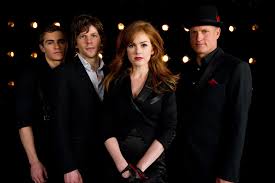 Good. Solid performances from the main cast (Mark Ruffalo, Michael Cain, Moragn Freeman, Jesse Eisenberg, etc). Surprisingly Isla Fisher was watchable (somehow she’s just hard to watch after a whiny performance in Confessions of a Shopaholic), and Dave Franco was quite good, in what I believe is his debut film.

Nothing spectacular, nothing special. This is not a dialogue-based film, the plot revolves more around action and suspense and mystery than it does around language. Nonetheless, a film that keeps one guessing and is fairly entertaining.

For me, the one great problem with this film was that the resolution/ending was ridiculously unsatisfying, the viewer feels duped (and not in the good sense like in The Prestige)- much like the reader of a detective novel would feel when the writer does not ‘play fair’ and creates a completely random ending which does not fit at all. We are strung along for 115 minutes after which we have a rushed revelation, which seems thrown in just for the element of surprise, so that the film-makers can have a laugh and say ‘Ha! You didn’t think of that did you?’

Too much time is spent on the exposition of the film and too little on the denouement.

In this film, the cinematography is a highly emphasized element, and is one of the film’s strongest points in my opinion.

The film focuses on magic and the mechanics of magic in addition to more mundane themes such as revenge.

Overall: Had high expectations, and was left feeling dissatisfied with the film. Still an entertaining watch though, if one has nothing else to do.

Carl Fogaty: ‘Course it is.

A History of Violence, a classic Cronenberg,  is a film adaptation of the graphic novel (1997) of the same name by John Wagner and Vince Locke. Written by Josh Olson and starring Viggo Mortenson, Maria Bello, Ed Harris and William Hurt in primary roles, this film is a fascinating exploration of the nature and implications of violence, identity and self-preservation.

The intriguing title of this film (developed by John Wagner) reveals that the film is much more character-driven than plot-driven, as all the best films are.

Cronenberg himself interpreted the title as working on three levels, “(1) a suspect with a long history of violence; (2) the historical use of violence as a means of settling disputes, and (3) the innate violence of Darwinian evolution, in which better-adapted organisms replace those less able to cope.”

And the film does develop significantly enough for it to work on multiple levels.

The film begins in a small town in Indiana, where the protagonist Tom Stall (Mortenson), lives a peaceful life running a local diner (somewhat reminiscent of Empire Falls [the novel and the mini-series]) until one evening when two men attempt to rob the diner. As the two strangers become increasingly aggressive, Tom kills them in self-defence and is hailed as a hero. But, unfortunately for Tom and his family, this is just the beginning of a series of events that will completely unravel their perfect lives, as soon after a scarred gangster called Carl Fogaty visits Tom and alleges that he is in fact Joey Cusack, a former member of the Irish Mob in Philedelphia.

Being a character-centred film, it is essentially an exploration of the identity and motivations of Tom Stall. Viggo Mortenson’s performance is stellar- he enriches a complex role with an equally complex, solid and multi-layered performance. Maria Bello delivers a note-worthy performance as Tom’s wife Edie, capturing mixed emotions with a deep sincerity, such that her character comes across as highly believable and realistic.

Script contains a number of violent scenes, after all, it does purport to be a study of violence. Dialogue is equally thematically appropriate (i.e., often violent, but with moments of emotionally charged family conversations).

Overall: A film that must be seen at least once, especially if one enjoys character focused films

Margaret Hale: …Everywhere there is conflict and unkindness. I think God has forsaken this place. I believe I have seen hell– and it’s white, it’s snow-white. 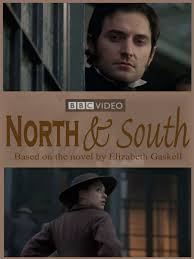 Based on Elizabeth Gaskell’s industrial romance novel of the same name, this BBC mini-series (four episodes) relates the story of Margaret Hale as she moves with her parents from the sunny southern English village of Helstone to the smoky, industrial northern city of Milton, where she is confronted with a entirely different social set, norms and way of life- best embodied in the enigmatic, brooding Mr. Thornton, owner of Marlborough Mills.

Acting:Daniela Denby-Ashe captures the mix of Margaret’s innocence and her fierce independence and strength (worth watching in: the first proposal scene, interactions with the Higgins’). She makes Margaret sympathetic to the viewer and presents a believable depiction of character evolution and growth through a well nuanced performance as a young woman coming into her own. Denby-Ashe is perfectly paired with Richard Armitage’s John Thornton.

Richard Armitage as John Thornton is incredible- clearly a very detailed actor and a master of subtlety, Armitage manages to convey a wealth of emotion with a single glance or turn of the gaze. The viewer is well aware that this is John Thornton as portrayed by Armitage and not Armitage playing Thornton-  this is an actor who loses himself in his role, thus delivering numerous award-worthy performances (worth watching in: first proposal scene, the strike, interaction with mother).

The rest of  the cast also deliver exceptional performances.

Uses a fair amount of dialogue from the original novel, but the adapted additions by Sandy Welch fit right in and enhance the effectiveness of the story on screen. The quote above is only one example of the stunningly constructed dialogue.

Very atmospheric- very Dickensian, which is apt considering Dickens was Gaskell’s editor for this novel. Milton feels vividly real, the viewer can practically feel and breath the smog of the city, amidst burgeoning industrialisation.

The cinematography also highlights themes effectively (romanticising memory, for instance- one of the major themes) and often evokes emotional responses from the viewer (especially coupled with the musical score) as at the ending of the first episode where Margaret’s voice-over is heard in the background to Thornton striding purposefully through the mill as fluffs of cotton fall like snow.

A perfect piano-based musical score for this mini-series (in particular, ‘I’ve seen helll’, ‘Thornton’s walk’ and ‘northbound train’)- it embodies emotion and era.